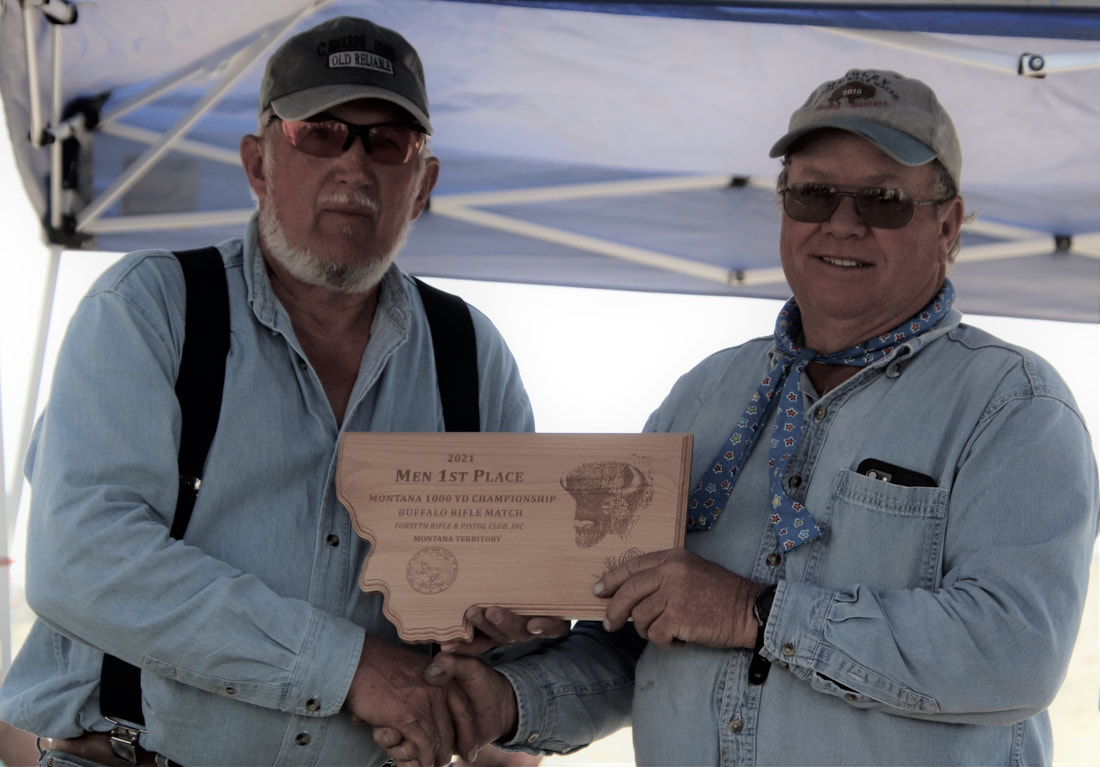 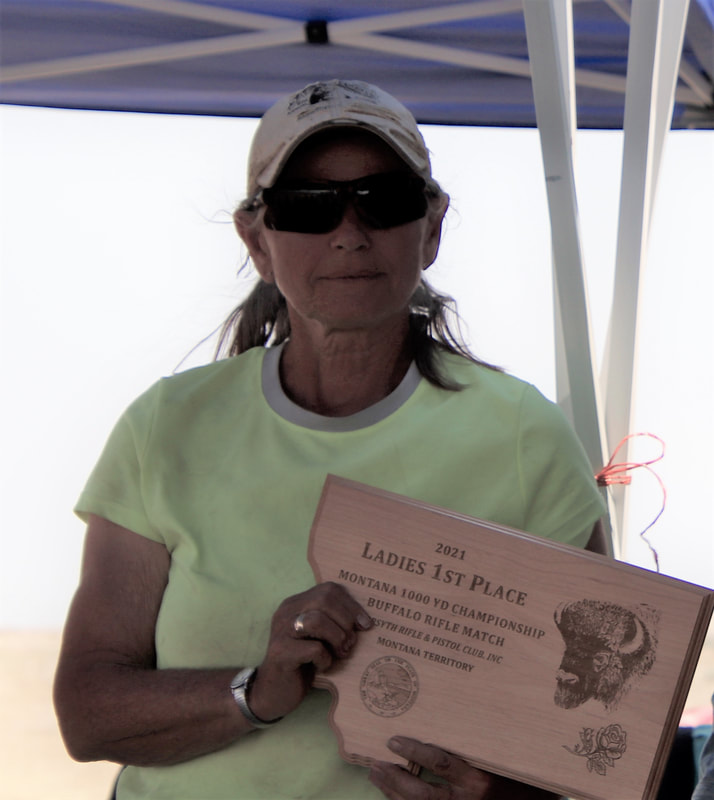 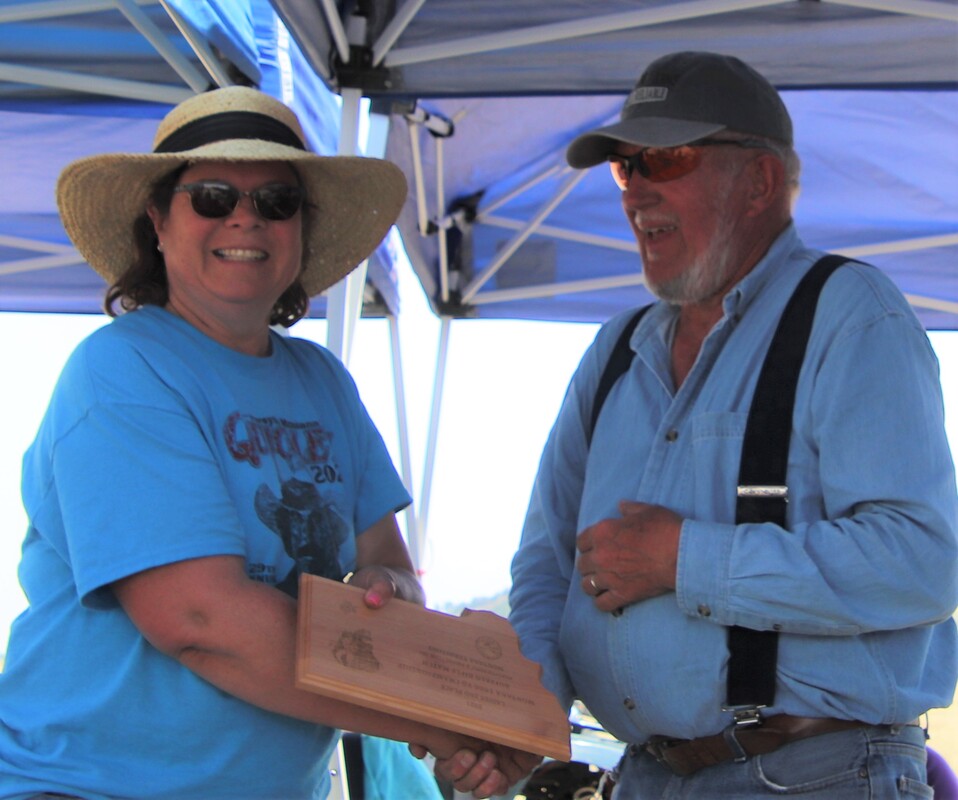 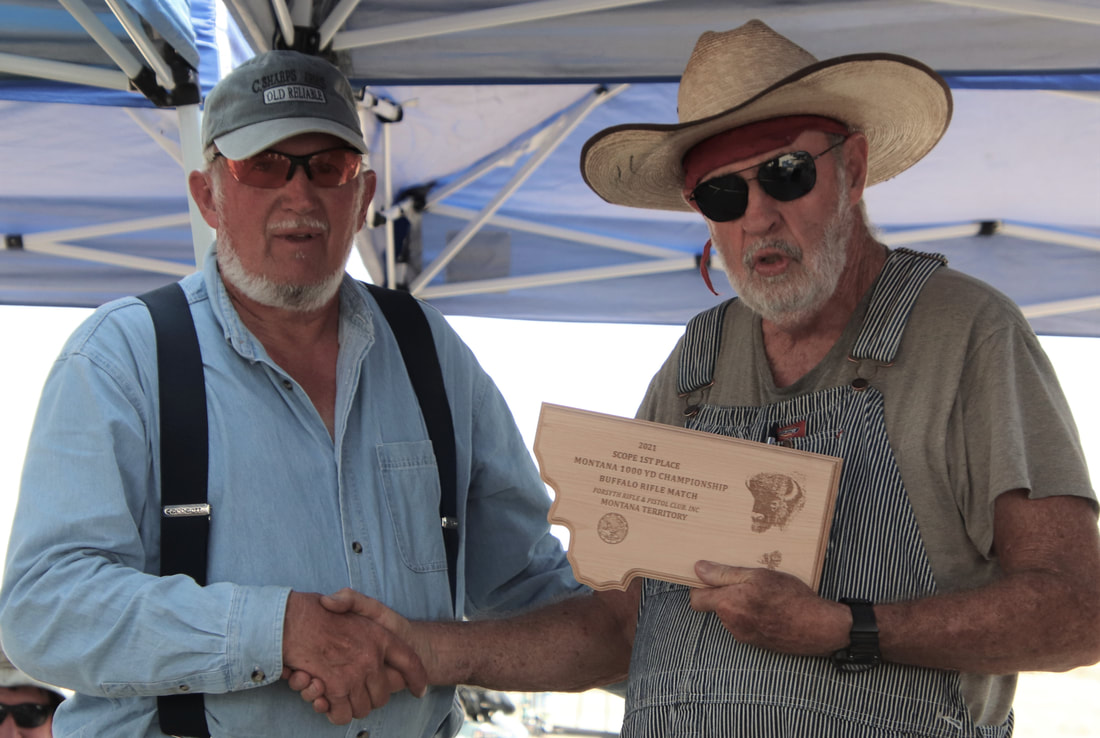 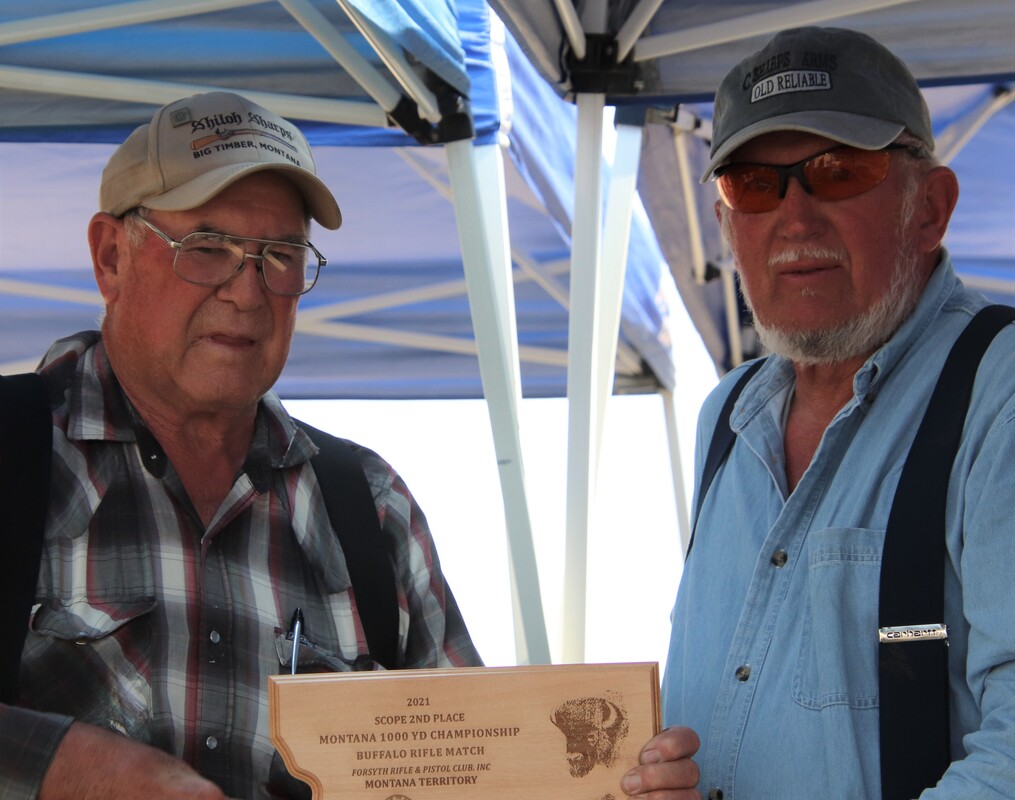 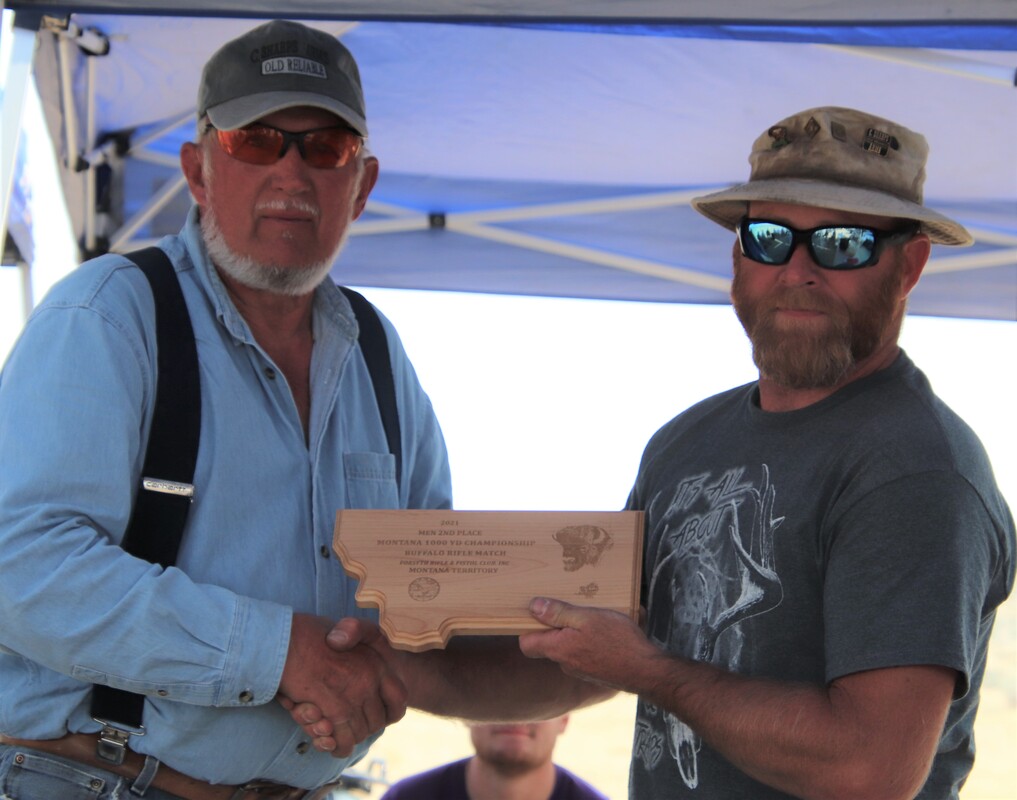 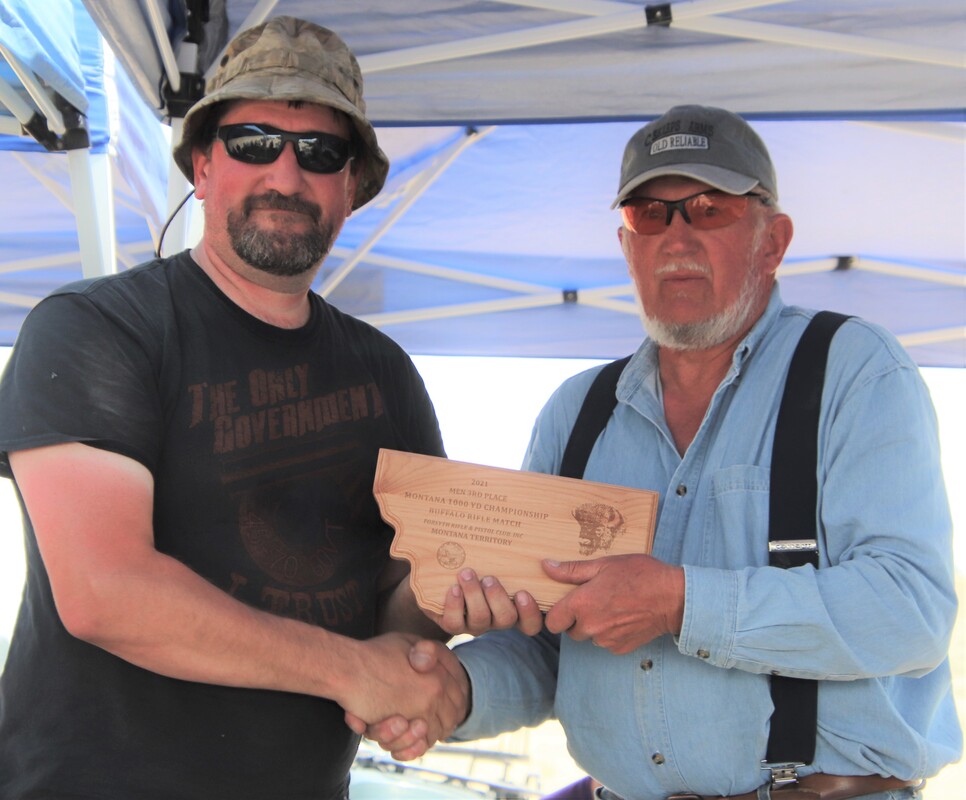 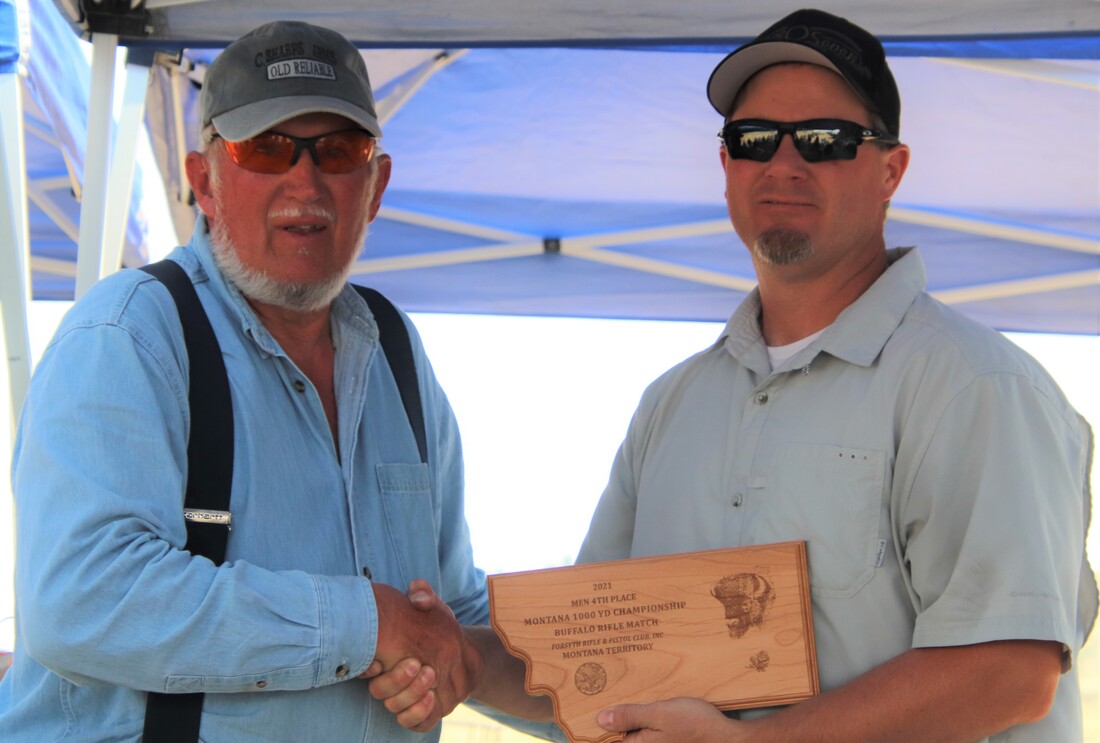 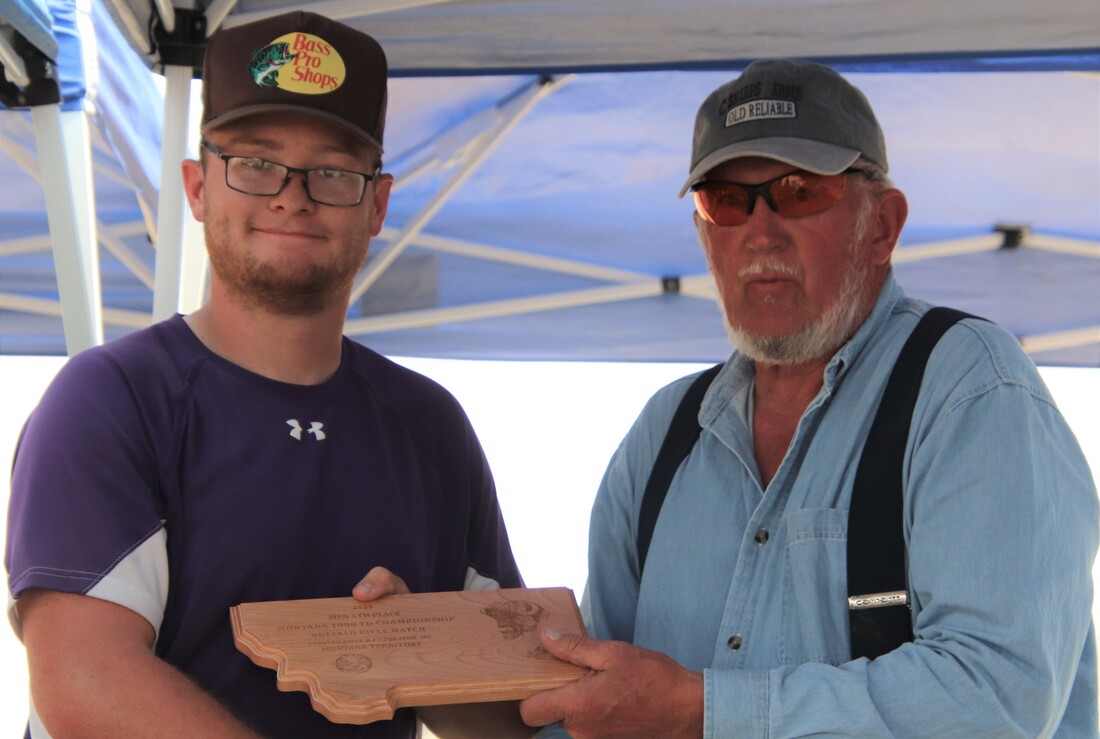 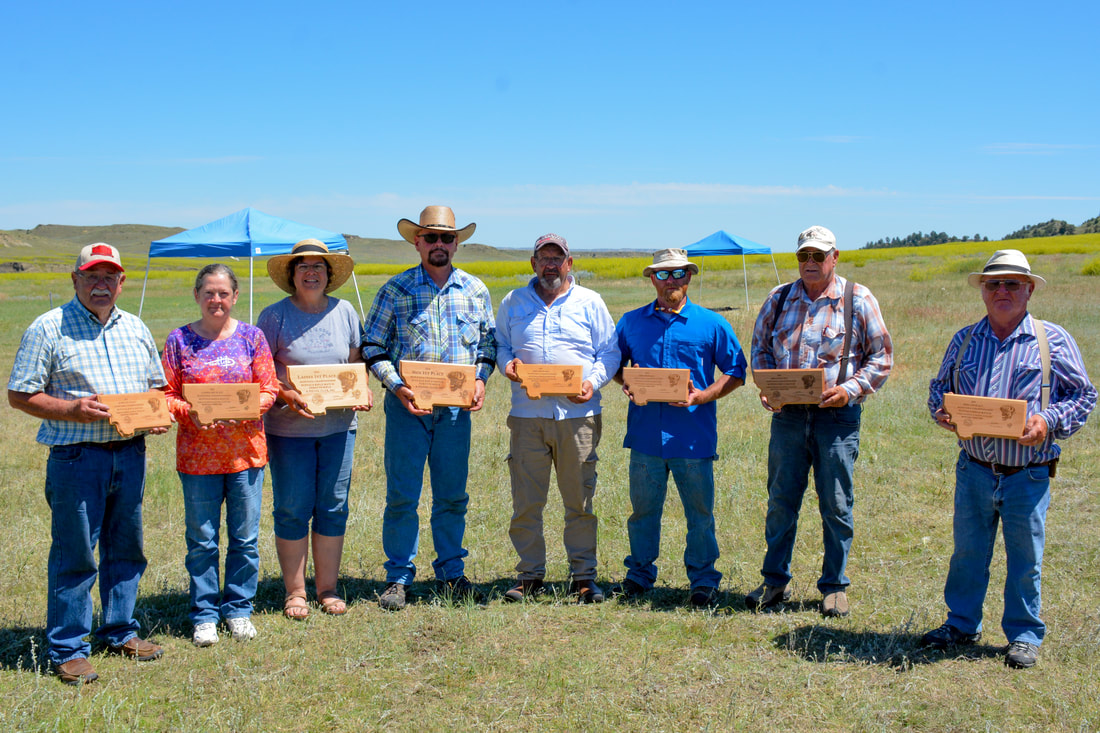 Husband and wife Randy and Loyce Ellingrod of Clearmont WY each place first in their respective categories at the annual Montana 1000 Yard Buffalo Rifle Championship held this last weekend at the Lee Range north of Forsyth. The weather was hot, but the clover sweetened the air to make a wonderful day of shooting.
Randy placed first in the Men’s category with a score of 25 out a possible 40 and Loyce placed first in the Ladies category with a score of 19 of a 40 possible.
In the Men’s category John Brooker of Casper WY captured second place with a score of 24. Wes Gamble, of Hysham, placed third with 20 hits. Fourth place trophy went to Elwyn Brunner, scoring 19 and fifth place went to Gene Gamble with 19 also, but one less hit on the tie breaking octagon.
Sam Boyd, of Billings, took second place in the Ladies category. Sam shot a 15.
George Jordan, a Billings shooter, won the first-place trophy in the scope class, shooting a 16.
Thirty-seven shooters competed this year shooting at two 48- inch squares and two octagons that could have been squares in another life if it wasn’t for someone with a cutting torch making them a bit smaller. If we had a dollar for every shot that missed because of the corners being gone, we could probably buy a new rifle!
There were 616 hits out of a possible 1480 shot resulting in a 41.6 hit percentage.  Pretty good scores for rifles from the 19th century.
The targets are 1000 yards away…. really! 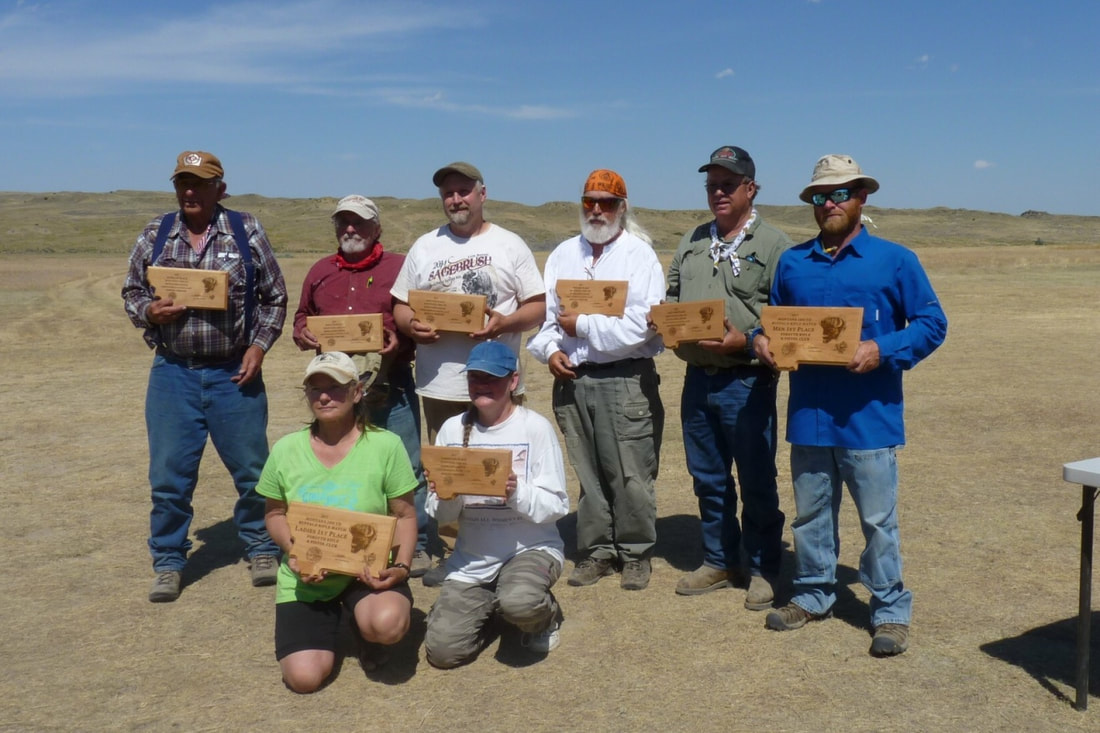 The Montana 1000 yard shoot was held on July 9th, 2017 by the Forsyth Rifle and Pistol Club at the Lee Ranch. The hundred degree plus weekend did not deter the   fifty-six shooters who shot at four targets, positioned at 1000 yards, two squares and two octagons. Shooters had one sighter and ten shots for score for a total of forty possible hits.
Match winner and first place in Men’s was Wes Gamble of Hysham, Mt with 23 hits, second place was Dave Gamble of Forsyth, with 22 hits who tied with Mike Bucholz, of Hot Springs, SD,  that took third with the tie breaker. Fourth was Wes Daems ,of Ennis Mt with 21 hits , and fifth was Ken Heier of Bismarck, ND with 21 hits also . In Ladies class Linda Clendenen, of Amidon ND won with 20 hits and Sam Boyd of Billings won second with 14 hits. Scope winner was Ed Schleichardt of Sheridan, WY with 20 hits.
Thank you to the Lee Ranch for hosting the shoot, Road Runner Catering, the scorekeepers and all who helped make this shoot a success, especially the shooters.
​ 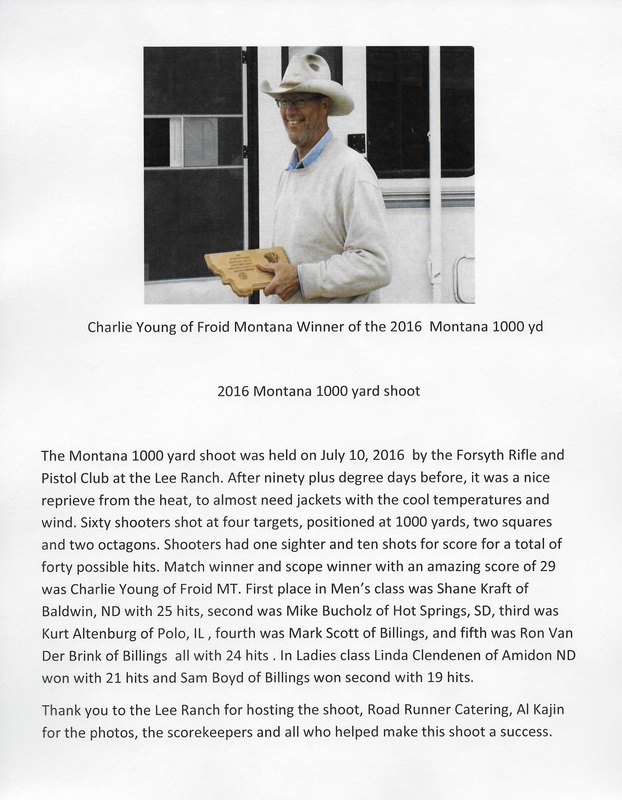 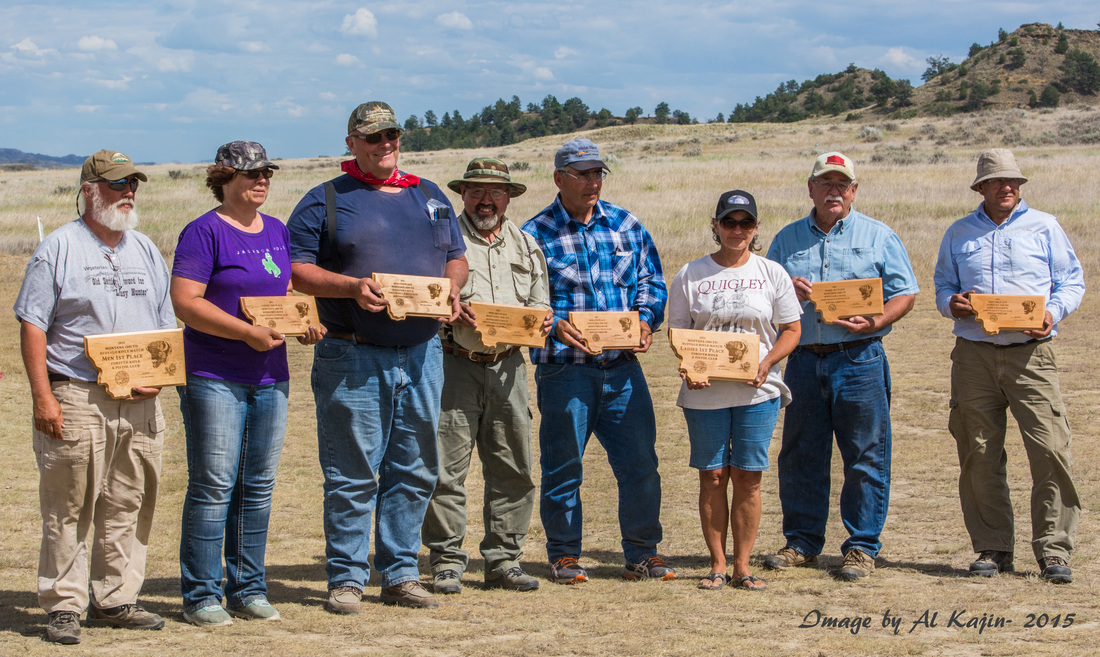 The 2015 Montana 1,000 yard match was held on July 12th at the Lee Ranch with sixty-three shooters in attendance. The temperature could have been uncomfortably warm if not for the wind, while the shooters were lamenting their misfortune to have to contend with such gusts, it did cool one off. There were four targets, two octagon and two squares, each at 1,000 yards, with one sighter and ten shots for score with a total of forty possible hits.

A big thank you goes out to the people who make this shoot possible, the Lee Ranch for providing us such an entertaining place to shoot, the club members who help not only at this shoot, but also the monthly shoots and also to the scorekeepers, spotters, shooters and Roadrunner Catering. 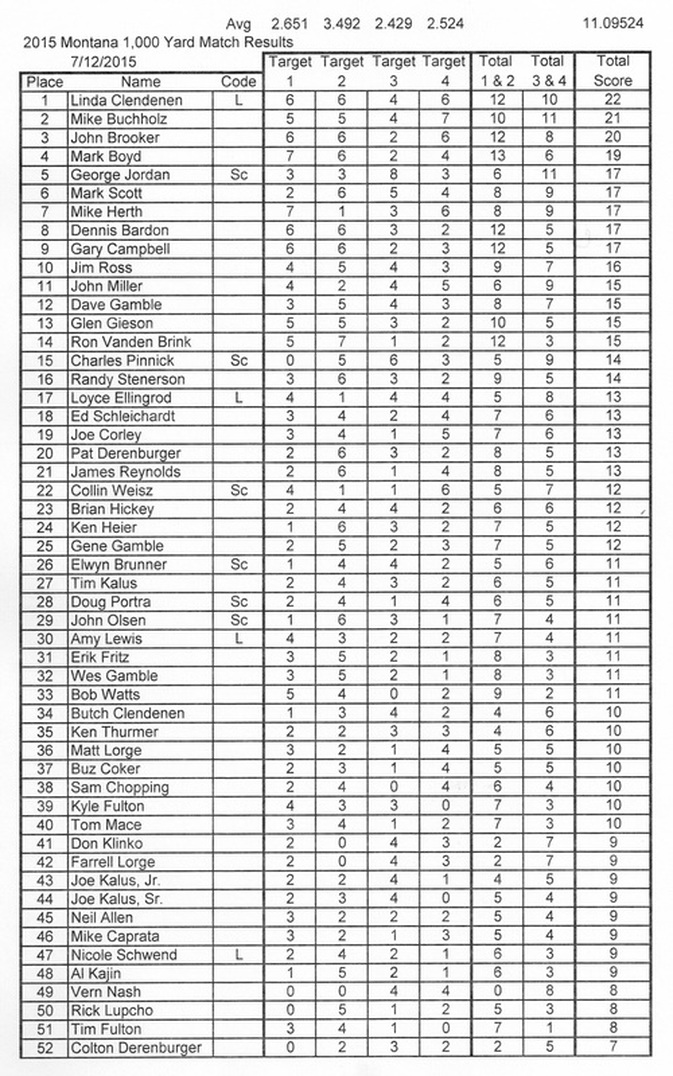 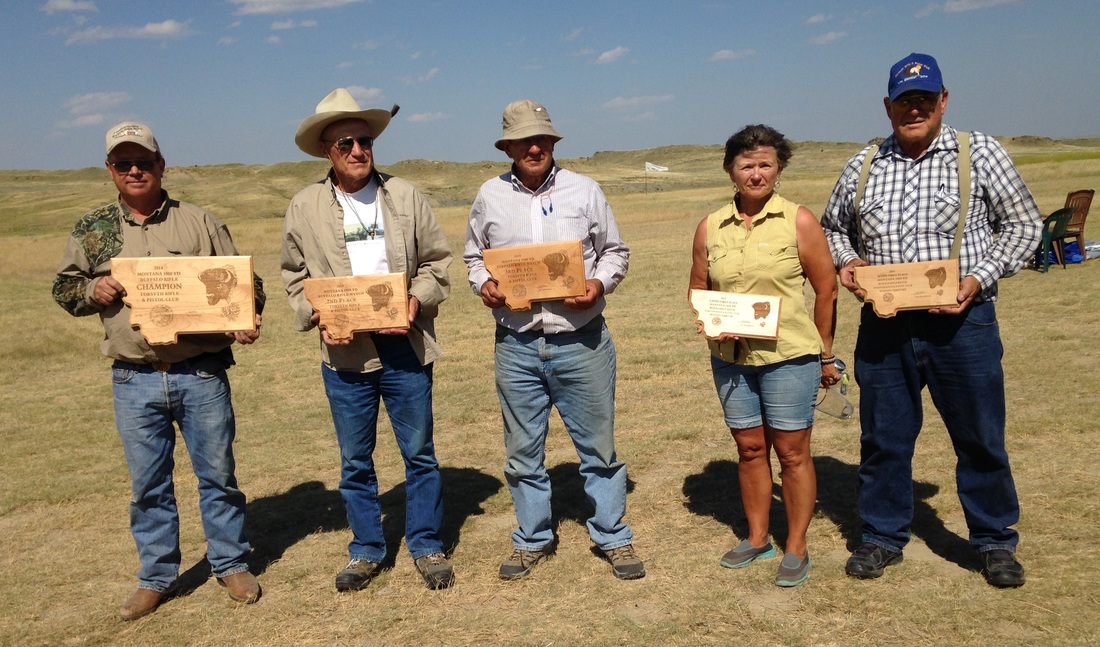 The annual Montana 1,000 Yard Championship was held on July 14, 2014 at the Lee ranch.  Seventy-four shooters participated in hot, windy conditions.  Shooters from Montana, Wyoming, North Dakota, South Dakota, Nevada, Nebraska, Minnesota and even a young marine stationed at Kings Bay, Georgia joined his grandparents for some challenging shooting.  Shooters were allowed one sighter and ten shots for score, at four targets at 1,000 yards for a total of forty.

The match winner with a total of 24 hits was Dave Gamble of Forsyth.  Three shooters followed with scores of 21.  The tiebreaker is the total on the more difficult octagon shaped targets.  That sorted the shooters with second place going to Joe Kalus of Buffalo, Wyoming, third place to John Brooker of Casper, Wyoming and fourth place to Randy Ellingrod of Clearmont, Wyoming who won last year’s event. Top scope shooter was Elwyn Brunner of Forsyth with 18 hits. The top lady was Linda Clendenen with 16 hits from Amidon, North Dakota, finishing in a tie with Lori Miller from Frannie ,Wyoming, but Linda won the tie-breaker. 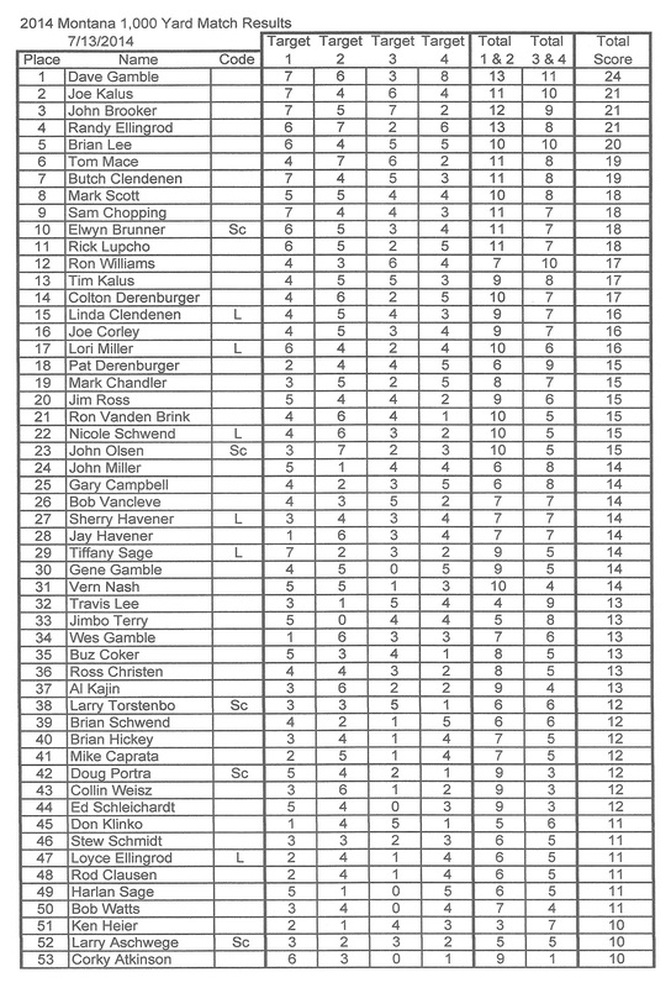 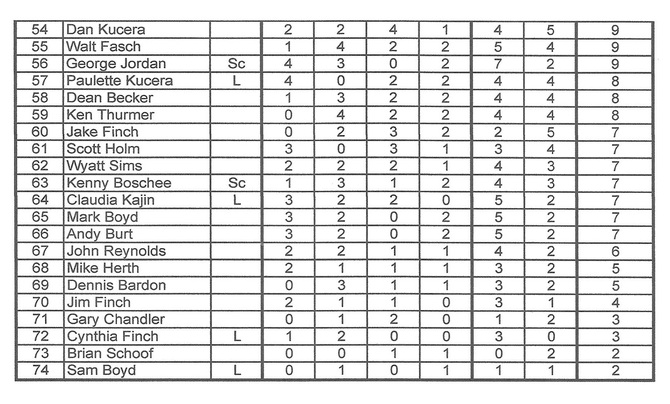 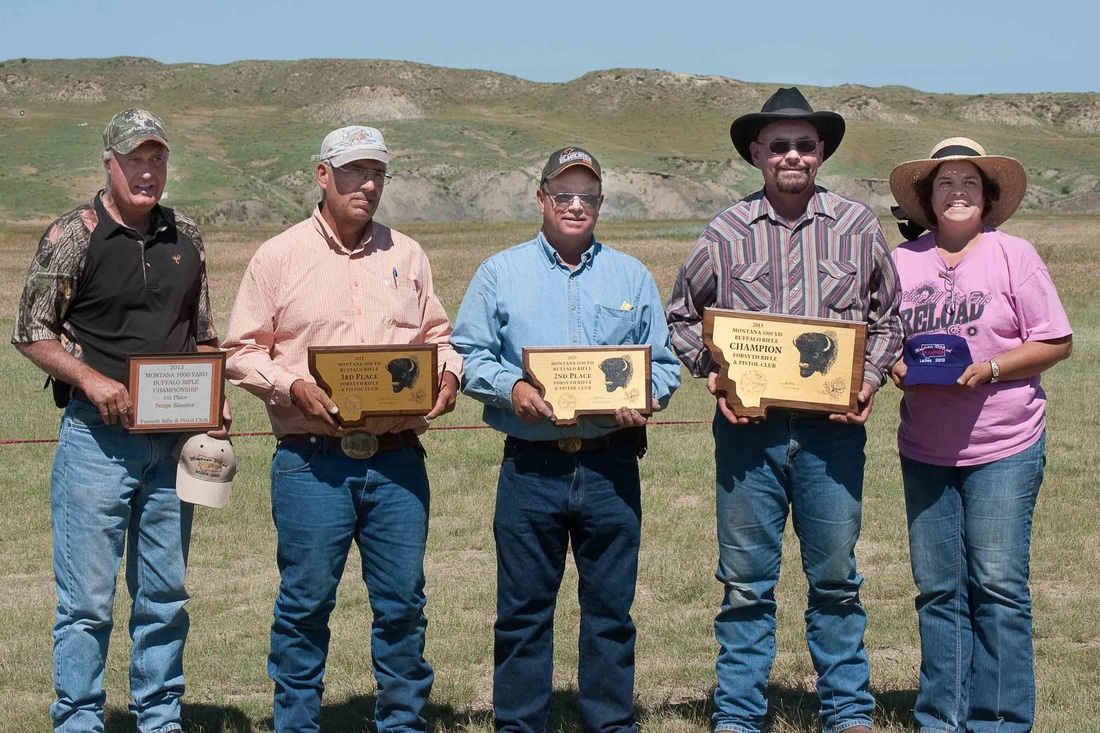 The cub scout troop provided a wonderful lunch for the hungry shooters and guests. The scorekeepers did an excellent job. 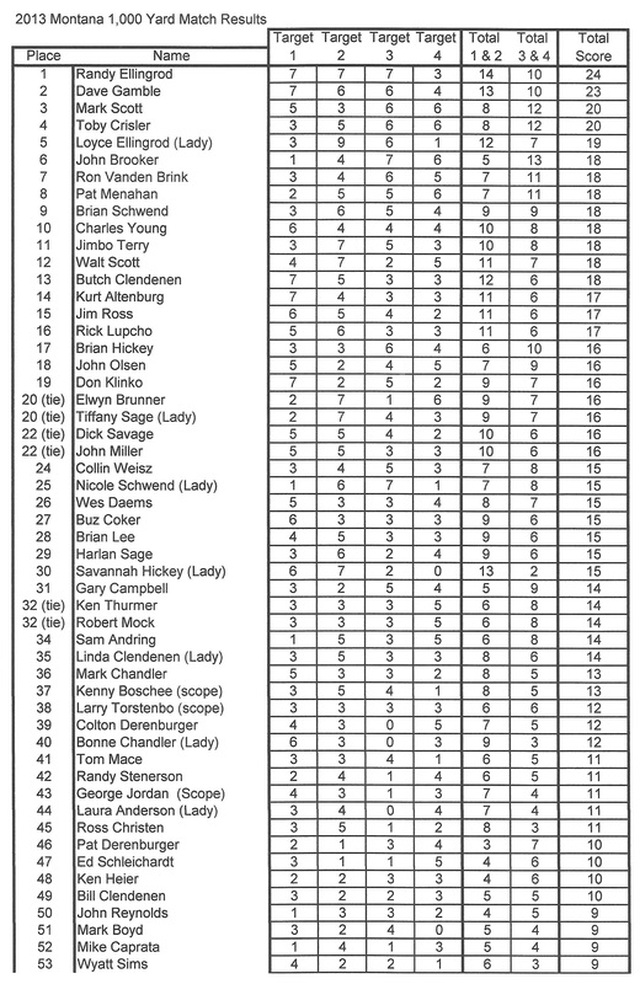 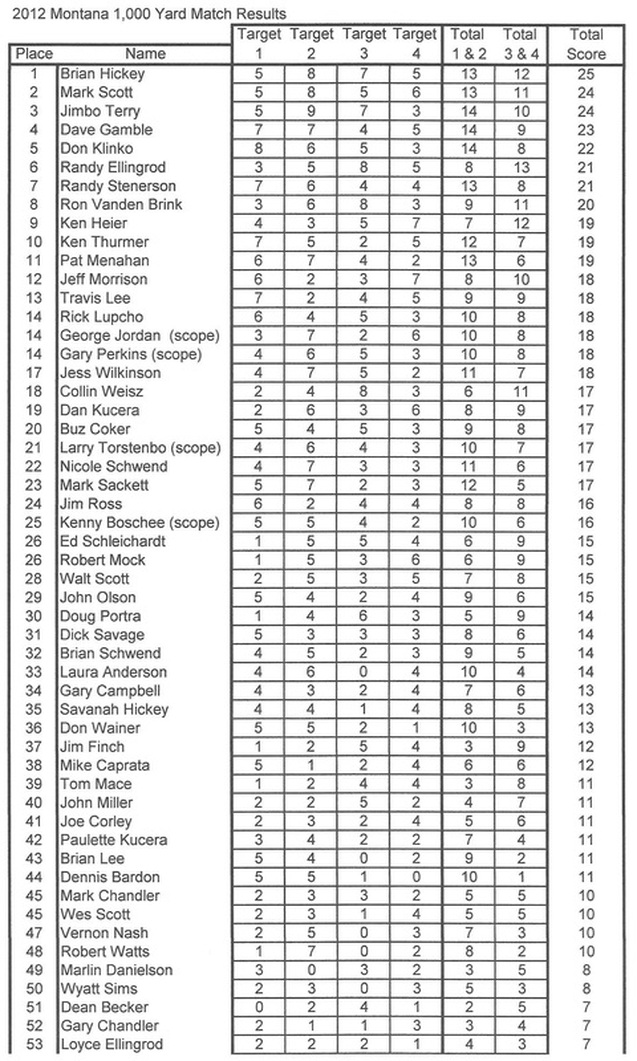